A glimpse of the working world of the future

What has long been treated as the ugly duckling of working environments is now becoming increasingly popular. We examine why that is so, how flexible working models and trust-based hours will change business in the long term, and the role HR has to play in that. 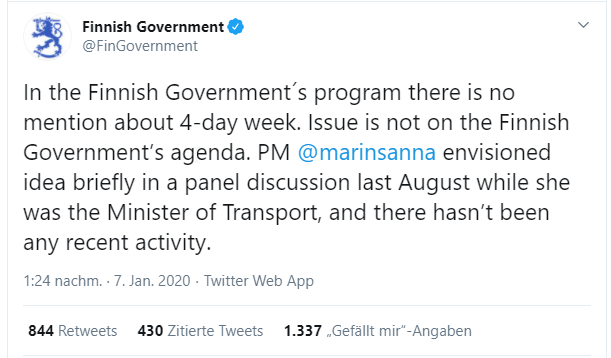 Work four days, get paid for five? It would be a rare employee who would turn down that offer – and it was the reason many eyes turned enviously to Finland at the start of the year. The new Head of Government there, Sanna Marin, had suggested just that. She did not do so as part of any government program, however, but simply as an idea during a panel discussion, as the Finnish government clarified later on Twitter. That was the end of the dream – even for the Finns.

And yet shortened working hours do not necessarily lead to a drop in production. Quite the contrary, in fact. According to a 2018 New Zealand study, employees who only have to work four days instead of five are happier, less stressed and even more productive. A one-month experiment by Microsoft in Japan came to a similar conclusion. Within the space of four weeks, the productivity of the employees there rose by an incredible 40 percent.

There’s more to this story, though. A four-day week could also help overcome the economic crisis caused by the coronavirus pandemic. New Zealand’s Prime Minister Jacinda Ardern, at least, is convinced of this. In a Facebook video, she therefore urges employers to think about introducing a four-day week and other flexible working models. Among German employees, she would find herself preaching to the choir, because according to a representative study, more than half would even be prepared to earn less in exchange for more free time.

Even so, only relatively few companies in Germany have so far introduced a shorter working week. “Many of them still have difficulty letting go of their working time models and shifts,” explains Prof. Tim Hagemann, an industrial psychologist from the Diakonie Bielefeld University of Applied Sciences in an article in the Spiegel magazine. The fact that the maxim “Trust is good, control is better” has been a driving force in the labor market since time immemorial surely doesn’t help, either.

No wonder, then, that Secretary of Labor Hubertus Heil has been fighting a losing battle for so long with his efforts to introduce a bill enshrining a “right to work from home” in law. Things have changed, now, though. Since whole hosts of employees were forced to move their workplaces into their own homes all but overnight in March, it is now clear how well that can go. According to a survey conducted by the Fraunhofer Institute for Applied Information Technology (FIT), 40 percent of respondents have found that they are considerably more productive at home than in the office, with 15 percent even saying their productivity is significantly higher – and they’re not wrong. More and more employers are now realizing that their employees can do good work even when they are working from home without being monitored by their supervisors, having to clock in or having their working time recorded in a digital system.

Trust is good, control is worse

It’s about time, then, that outdated ways of thinking were discarded and the subject of trust-based working time landed on the agenda instead. And this doesn’t just apply to working from home. After all, a study by the German Economic Institute (IW) discovered that while trust is good, control is actually worse. The study found that the more employees are monitored and controlled, the unhappier they are. On the other hand, those who have the freedom to design their own working times and places – within certain defined framework conditions – both enjoy their work more and do it better. That’s two more good reasons why HR managers should look into flexible working times and models.

As IW HR chief Ulrike Kenkenberg says: “Depending on how working times were organized previously, it requires a fundamental change in the corporate culture.” She recommends that anyone intending to introduce trust-based working hours in their company in the future must understand that this is a change process requiring particular care and attention. This is precisely where HR departments come in. They can and must be the driving force accompanying, shaping and pushing forward the necessary change with all their might.

Related articles
Experience
How evaluations can enhance employee satisfaction
To ensure that staff evaluations become influencing factors for your staff, we will show you how in-year appraisals can be performance-enhancing.
7 min
Experience
The features of good consulting in an HR context
The introduction of an HR system brings with it many challenges. Many companies rely on external support - we will show you what is important when choosing the right implementation partner.
3 min
Experience
How good planning can help HR organizations successfully make the move to the cloud
Cloud or on-premise? According to experts, this isn’t an either/or situation. They recommend combining the benefits of the two supply models in hybrid HR landscapes.
4 min